Splurging on restaurants isn’t a thing normal people would do on a weekly basis. But who hasn’t daydreamed about it? The most splurged some have gone contenting themselves with the burgers from that local burger joint everyone has been talking about. But some outrageously max out their cards on meals and cocktails, which can shoot up sugar levels to a great degree only to be burned in the gym the next day. But what can we say? They’re celebrities! Big-time, famous celebrities who can do pretty much what they want with the massive paychecks they get. They can order all the shots and steaks that can fill themselves and their entourage without being bothered with the menu price. Also, they can afford the tips the hospitality demands. Here are those instances. 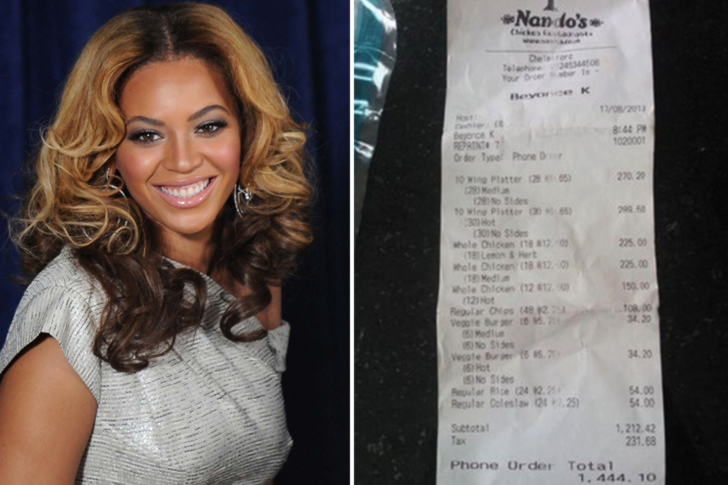 Nando’s Chicken is known for its chicken peri-peri Portuguese style, and Beyoncé is a fan. After having a concert in the rain, she placed 48 orders of chicken from an outlet in Essex. She thought of giving her prod team a treat after getting through her sound through the downpour, and she is such a Nando’s fan, just like Prince Harry, Ed Sheeran, and Drake, that she splurged all £1,444.10 in cash on the outlet. Well, it isn’t an investment of sort just yet, it’s just a treat for Queen B to her staff. We bet the delivery guy also got a hefty tip.

Donnie Wahlberg was famous for being a band member of the New Kids on the Block boy-band. But he became all the more famous when a waitstaff from Waffle House in North Carolina posted on social media how the actor left the employees a tip of $2,000 for the total of $82 ordered meal by the actor. It is safe to assume that it is indeed a shift from the former disruptive guy who credits to the arson case he was charged for when he ignited a vodka puddle in his hotel room. One of the effects of the incident was leaving the housekeepers quite a mess for what he did.

There was a time when an Instagram account posted a photo of a receipt it claimed to be one of Lionel Messi’s from a weekend he spent in Ibiza with his fiancée and other fellow soccer players. At that time, they were enjoying and wasting away at the Club Restaurant Cabaret. The receipt showed that Messi just spent over £37,000 on drinks for just one night. For sure, the soccer player just swiped it off his credit card, although he denied publicly that the receipt wasn’t his.

There was a controversial Twitter post of LeSean McCoy’s bill from PYT, a Philadelphia burger joint where it reflects the twenty-cent tip he has given. The receipt has his signature on it, and many thought the post was only a hoax. However, McCoy did not deny the photo and explained that he gave such a tip because of the bad service he received from the food chain. This resulted in a controversial social media outrage in Twitter defending how bad the service could’ve been to get a tip like that. The issue got bad to the degree that actor Charlie Sheen pledged to track down the waiter or waitress and give them $1,000. Although, no reports have been made as to whether Sheen was successful in it. 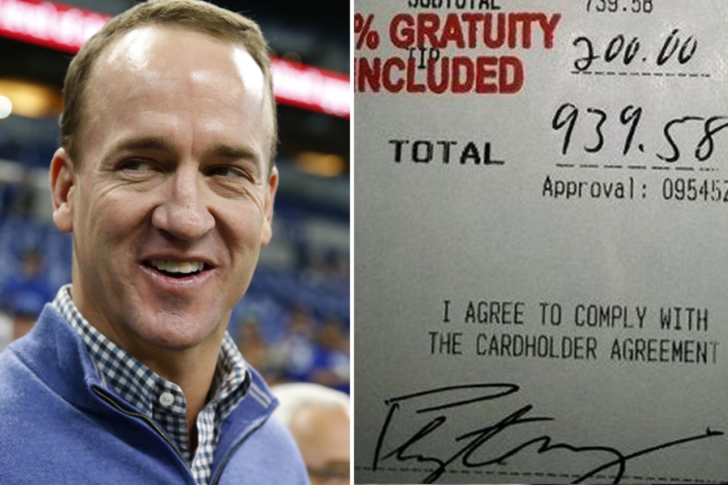 On the week Peyton Manning left the Colts, the team he played with for over a decade already, generously tipped the waiter on Angus Barn restaurant in North Carolina. For a meal served to cost only $739, Manning expressed his appreciation by not only paying an 18% service charge but also leaving a hefty 25% tip to the waiter – making his tip more than half of the bill. The waiter, however, in his excitement, took it to social media and enjoyed the attention credits to his encounter with Manning. Unfortunately, the management of Angus Barn thought what the waiter did inappropriate and bad publicity, so they fired the incredibly happy waiter.